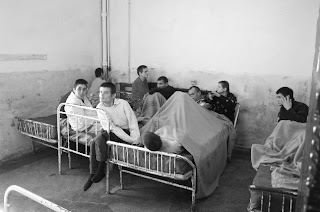 No this is not a pretty picture and it gets really bad. In the case of Nencheva and Others v. Bulgaria, the European Court of Human Rights held, unanimously, that there had been a violation of Article 2 (right to life) of the European Convention on Human Rights. Fifteen children and young adults died between 15 December 1996 and 14 March a home for physically and mentally disabled young people in the village of Dzhurkovo, from the effects of cold and shortages of food, medicines and basic necessities. The manager of the home, observing the problems, had tried without success on several occasions to alert all the public institutions which had direct responsibility for funding the home and which could have been expected to act.

You may not like to read in the Court's judgment about parents who never visited their disabled children and who did not even visit the funeral. But are they really to blame; or is this part of a bigger - cultural and/or socio-economical - problem? Bulgaria has more institutionalised mentally and physically disabled children than anywhere else in Europe and has a major problem with abandonment of children in institutions. Why is that? This case illustrates why the EU (and definitely the EU Charter and the ECHR) make sense. Because we should never take acquired human rights for granted and we should wherever possible try to improve the situation of others in (and outside) Europe especially when the lives of the most vulnerable are at stake.

The Bulgarian case almost makes the rest of this weeks cases pale into insignificance. But it doesn't really. In Bor v. Hungary the ECtHR found a violation of article 8 (family life) of the Convention. The applicant complained of the extreme noise disturbance caused by the trains ever since steam engines had been replaced by diesel engines in 1988, and of the authorities’ failure to enforce, in an effective and timely manner, the railway company’s obligation to keep the noise level under control. The Court concludes that the State has failed to discharge its positive obligation to guarantee the applicant’s right to respect for his home:

"The Court accepts that the State enjoys a margin of appreciation in determining the steps to be taken to ensure compliance with the Convention when it comes to the determination of regulatory and other measures intended to protect Article 8 rights. However, it emphasises that the existence of a sanction system is not enough if it is not applied in a timely and effective manner. In this respect it draws attention once again to the fact that the domestic courts failed to determine any enforceable measures in order to assure that the applicant would not suffer any disproportionate individual burden for some sixteen years."

S.C. Complex Herta Import Export S.R.L. Lipova v. Romania (only available in French) concerns the excessive fines of around 14,000 euros (EUR) and EUR 850 imposed on it for failing to comply with certain legal requirements regarding the display of information. Relying on Article 1 of Protocol No. 1 (protection of property), the applicant complained of interference with its right to the peaceful enjoyment of its possessions, arguing that the fine imposed on it for failure to display information had been incompatible with the principle of proportionality. The Court however found no violation in this case:

In Gün and Others v. Turkey (also only available in French; but why, because this seems to be an interesting case) the applicants complained of the sentence and fine imposed on each of them for taking part in an illegal demonstration to mark the anniversary of the arrest of the head of the PKK terrorist organisation. After being taken into custody and interviewed by the police, the applicants were sentenced in 2005 to one year and six months’ imprisonment and to payment of a fine. According to the ECtHR article 11 of the Convention has been violated:

In Constantin Tudor v. Romania the Court found a violation of article 3 of the Convention. The applicant succesfully complained of the material conditions in Jilava Prison, where he had been detained for almost ten months in particular overcrowding and poor hygiene conditions. The Court reiterates that under Article 3 of the Convention the State must ensure that a person is detained in conditions which are compatible with respect for his human dignity, that the manner and method of the execution of the measure of detention do not subject him to distress or hardship of an intensity exceeding the unavoidable level of suffering inherent in detention and that, given the practical demands of imprisonment, his health and well-being are adequately secured.

In Sidikovy v. Russia the Court concludes that implementation of an extradition order against the applicant to Tajikistan would give rise to a violation of Article 3 of the Convention, since there are serious reasons to believe in the existence of the practice of persecution of members or supporters of Hizb ut-Tahrir, whose underlying aims appear to be both religious and political.

In its judgment in the case of Turluyeva v. Russia the Court held that Russian authorities failed to protect the life of a young man apprehended in Chechnya. The case concerned the disappearance of a young man after last having been seen at the premises of a police regiment in Grozny (Chechnya) in October 2009. The Court underlined that the Russian authorities were sufficiently aware of the gravity of the problem of enforced disappearances in the North Caucasus and its life-threatening implications, and that they had lately taken a number of steps to make investigations of this type of crime more efficient. The Court therefore found, in particular, that the authorities should have taken, but had failed to take, appropriate measures to protect the life of Ms Turluyeva’s son once they had learned of his disappearance.

Courtesy: Press Service of the European Court of Human Rights in Strasbourg
on donderdag, juni 20, 2013