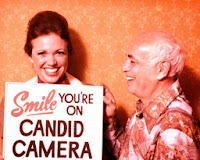 NO REASON FOR SMILING THIS TIME (Art. 8) In the case of Söderman v. Sweden. The European Court of Human Rights held, by a majority, that the Swedish legal system did not protect a minor girl whose stepfather attempted covertly to film her naked. In 2002, when she was 14 years old, the applicant discovered that her stepfather had attempted to secretly film her naked by hiding a video camera in the bathroom, which was in recording mode and directed towards the part of the room where she would undress to take a shower.  She complained that the Swedish legal system, which at the time did not prohibit filming without someone’s consent, had not protected her against the violation of her personal integrity. The Court found that Swedish law in force at the time had not ensured protection of Ms Söderman’s right to respect for private life – whether by providing a criminal or a civil remedy – in a manner that complied with the Convention. The act committed by her stepfather had violated her integrity and had been aggravated by the fact that she was a minor, that the incident took place in her home, and that the offender was a person whom she was entitled and expected to trust. The Court held that there had been a violation of Article 8 of the Convention.

“117.  Having regard to the all the above-mentioned considerations, the Court is not satisfied that the relevant Swedish law, as it stood in September 2002, when the specific act of the applicant’s stepfather in attempting to covertly film the applicant naked in their bathroom for a sexual purpose occurred, ensured protection of her right to respect for private life in a manner that, notwithstanding the respondent State’s margin of appreciation, complied with its positive obligations under Article 8 of the Convention. The act in question violated the applicant’s integrity; and was aggravated by the fact that she was a minor, that the incident took place in her home, where she was supposed to feel safe, and that the offender was her stepfather, a person whom she was entitled and expected to trust. However, as the Court has found above, neither a criminal remedy nor a civil remedy existed under Swedish law that could enable the applicant to obtain effective protection against the said violation of her personal integrity in the concrete circumstances of her case.”

In a dissenting opinion judge Kalaydjieva agrees with the majority that the applicant’s personal integrity was violated by the acts committed by her stepfather, but fails to understand the logic followed by the majority in finding and providing a legal response to these questions since:

“the applicant did not claim that recourse to criminal law was the only way that Sweden could fulfil its obligation under Article 8 to protect her against her stepfather’s act (see paragraph 87) and did not criticise the prosecution for not complying with an obligation to indict crimes, but rather found that the legislator had failed in its positive obligation to criminalise the act of covert filming of a minor in a situation which upset the essential aspects of personal integrity. Therefore the majority failed to state clearly whether (similarly to the cases mentioned in paragraphs 83 and 84) positive obligations arose in the present case – as maintained by the applicant – and if so which ones, or whether a criminal-law remedy was nevertheless necessary to achieve the appropriate and acceptable level of protection of the applicant’s rights under Article 8, or – alternatively – that the decision whether or not to criminalise and prosecute such acts remained within the Swedish authorities’ margin of appreciation.”

For a good comment on this case read Laurens Lavrysen, Failure to protect minor against stepfather filming her naked violates Article 8: Grand Chamber agrees with our third party intervention in Söderman v. Sweden He concludes:


"By abandoning the ‘significant flaws’ test, the Grand Chamber has rectified the deferential turn in the Court’s positive obligations case law taken in the Chamber judgment. The Grand Chamber judgment clearly illustrates the importance the Court attaches in its positive obligations case law to the development of a legal framework to adequately protect human rights (see more into detail my upcoming contribution in this volume). While the Court’s positive obligations case law has sometimes been criticized for being too intrusive, too unpredictable and too much developed on a case-by-case basis, the Grand Chamber’s approach has the advantage of being an incentive for legislators to anticipate on human rights violations in interpersonal relations, thereby decreasing the need to empower courts to fill loopholes of human rights protection. The Court will accept the state’s margin of appreciation, but only insofar ‘an acceptable level of protection’ is provided under domestic law. While the ‘significant flaws’ test in the Chamber judgment was more state-centred – in the sense that it was more concerned about state interests than about individual interests – the Grand Chamber judgment rightly places individuals interests back at the centre of the analysis: the state’s margin of appreciation is delineated by the effective protection of human rights in interpersonal relations and not the other way around. For these reasons, the Grand Chamber judgment should be welcomed as a significant step in the development of a mature positive obligations case law."

DETENTION OF A MENTALLY DISTURBED MINOR (Art. 3) In the case of Blokhin v. Russia the Court held, unanimously, that a 30-day detention of mentally disturbed boy was unjustified. This was the first time the Court examined the special procedures applicable in Russia to minors who had committed a delinquent act before reaching the statutory age of criminal responsibility. The case concerned the detention for 30 days of a mentally disturbed 12-year old boy in a juvenile temporary detention centre. The Court found inter alia that the boy had not received adequate medical care for his attention deficit hyperactivity disorder and enuresis at the detention centre:

“92.  The Court observes that the applicant’s grandfather consistently informed the authorities about the applicant’s health problems, stating that his state of health was incompatible with detention (see paragraphs 20, 40 and 41 above). In such circumstances, and in the absence of any documentary evidence supporting the Government’s allegation to the contrary, there is no reason to doubt the applicant’s assertions that the staff of the temporary detention centre for minor offenders had been made aware of his health problems.
93.  Further, the Court notes that the Government did not submit any document capable of refuting the applicant’s allegation that during his detention in the temporary detention centre for minor offenders he did not receive medical supervision and care appropriate to his health condition. The Court takes note of the fact that the centre’s medical unit was staffed by a paediatrician and several nurses, and a psychologist who had no medical qualification. It follows that during his detention in the centre the applicant was supervised by a paediatrician who had no expertise in the treatment of the mental disorder from which he suffered. There is no evidence that he was examined by a neurologist or a psychiatrist, despite the fact that regular consultations by these specialist doctors were repeatedly recommended for him, or that the medication prescribed for him by a psychiatrist before his placement in the centre was ever administered during his detention.
94.  The Court finds the lack of expert medical attention with regard to the applicant’s condition unacceptable. It notes with concern that during the applicant’s detention his condition deteriorated to the point where he had to be taken to hospital with neurosis on the day after his release (see paragraph 38 above).
95.  To sum up, the Government has not provided sufficient evidence to enable the Court to conclude that the applicant received adequate medical care in respect of his attention-deficit hyperactivity disorder and enuresis during his detention in the Novosibirsk temporary detention centre for minor offenders. The Court considers that the lack of adequate medical treatment amounted to inhuman and degrading treatment within the meaning of Article 3 of the Convention. In view of that finding, it is not necessary to examine the remainder of the applicant’s complaints under that Article.”

Courtesy Press Service of the European Court of Human Rights in Strasbourg
on donderdag, november 14, 2013